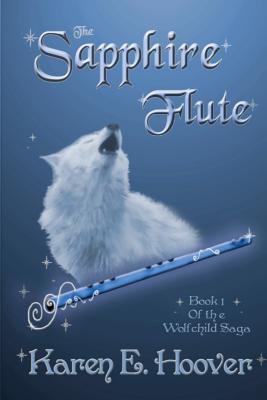 First book review of the year goes to the wonderful Sapphire Flute (The Wolf Child Saga, #1) by Karen E. Hoover.

Here’s the summary, taken from Goodreads:

It has been 3,000 years since a white mage has been seen upon Rasann. In the midst of a volcanic eruption miles outside of her village, Ember discovers she can see magic and change the appearance of things at will. Against her mother’s wishes, she leaves for the mage trials only to be kidnapped before arriving. In trying to escape, she discovers she has inherited her father’s secret-a secret that places her in direct conflict with her father’s greatest enemy. At the same time, Kayla is given guardianship of the sapphire flute and told not to play it. The evil mage C’Tan has been searching for it for decades and the sound alone is enough to call her. For the flute to be truly safe, Kayle must find its birthplace in the mountains high above Javak. The girls’ paths are set on a collision course…a course that C’Tan is determined to prevent at all costs.

I finished this book the last day of December, and it was such a nice book to finish the year with. I have to admit, it took me a little bit of time to get into this book for me, mainly because to begin with, the two main character girls are a little too similar for my liking. They sound a little too much alike and have too similar of temperaments at the beginning of the book, that I had to really remind myself which story I was in at the moment, as the story goes back and forth between the two.

That feeling evaporated as the story developed, though, and especially as I was simply consistently blown away with the pure imagination and originality of this book. I was so pleased by some of the elements that were implemented: specific kinds of magical tools, the description of the magic itself, and especially, especially the correlation between music and magic—because really, music is the closest thing we have to magic in our own world. Imagine if music conveyed with it images, spells, and power?

While Kayla and Ember may have similar personalities, they are both very strong female characters, and their journeys are so very different (and yet intrinsically connected!) that they do end up being distinctly individual in their stories.

The second book of the Wolf Child series (The Armor of Light) is available and I’m looking forward to reading it and seeing where this journey goes!

A little background history, The Sapphire Flute was originally published by a publishing house, but that publishing house closed, so Hoover now self-publishes the ebooks, but it is still available in hardcover, if you’d rather read an actual book (the cover is a little different, though) Ebooks are available on Hoover’s blog. 🙂

One thought on “The Sapphire Flute by Karen E. Hoover”

When not writing, Lisa is a knitter, crocheter, and all-around stitch-witch, and a sometimes bookbinder.
Join 94 other subscribers