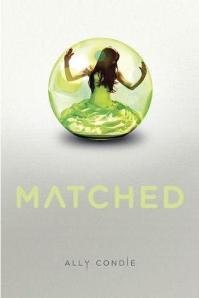 I downloaded this on a whim as my one free audible.com download. It was the first audiobook I’d listened to in a couple of years—the last being Harry Potter and the Order of the Phoenix on a roadtrip with my brother. It was a very nicely done audio book. The voice was a bit annoying at times, but the production and sound effects were impressive. There were loudspeaker effects and things like that which I wasn’t really used to or expecting, but they did add to the experience.

On to the book itself, in case you haven’t been familiarized with the buzz surrounding this book, it’s about a utopian/dystopian society (people seem to forget or ignore the fact that Utopia itself was a dystopic book) where every person is watched and kept data about since the moment they’re born. Because of this, they can predict everything you might want or need, and the society can provide it for you—which they do, before you even ask for it, most of the time.

In this society, you are matched at the age of 17 or so, unless you’ve chosen to be a “Single.” (Which choice is forever, folks.) Cassia Reyes is delighted when she’s matched with her close friend, Xander, but after she gets home from her Matching ceremony, the info card they’ve given her does something odd. It shows her Xander’s face alright, but then it blinks to a picture of another boy that Cassia knows—a Ky Markham. She soon finds out that for certain reasons, Ky could never be her true match, but that doesn’t stop her from being curious about what exactly happened here. Or about how much say the society has on her choices, or lack thereof.

I know a lot of people are miffed because it’s a lot like The Giver. I’ve never actually read The Giver, so I can’t say anything about the concepts originality or not… even I could see that the dystopia wasn’t the most original around there, but I don’t really think that it held the book back in any way. The start was a bit slow, but once we got into the story and Cassia starts really figuring out just how messed up the society is I really enjoyed it.

I was frustrated at first by how hesitant Cassia is to question everything, but then I decided to forgive her of that. After all, this is the world she was born into, the only world she knows. It seemed for a time that she was the first person to ever question, which I would not have been able to accept at all, but Condie was very smart about how she put her world together.

I was VERY impressed by the love triangle. At first I didn’t know what to think because Ky and Xander were so very similar, and they are fairly similar, but still I like Cassia’s choice. What I like even better is the friendship of the unlucky one that happens *after* she chooses. Anyhow, really enjoyed the book. It’s not something I’m dying to read over again right away, but it’s a good solid read, and I have a feeling I’ll LOVE the sequel.

All in all, I’d give it about a B + It took me a long time to like Cassia much, partially because of her utter acceptance of her world (though I now see that as a plus) and partially because of the narrator’s voice on the audio book, but I think this would have been true if I’d been reading as well. I’m very interested in where Condie is going to take this one, though. I’ll be keeping an eye out.