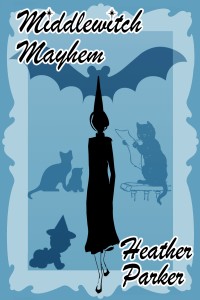 Just because Alicia Meldrew is a witch doesn’t mean that everything in her life is double, double, toil and trouble. Then again, trouble does have a way of finding her over and over again, even in the cozy little town of Middlewitch.

Alicia is starting to settle down with her new husband and a baby on the way, but little things like demon possession and mis-cast time spells keep getting in the way. Still, lake monsters, vampires (the bad kind, because you can’t generalize, you know), and vengeful enemies are no match for her, especially with the support of family and friends.

With the community coming together to help her, her cats Domino and Tango dispensing wisdom each in their own way, and her husband James even doing a little bit of magic himself, Alicia can manage just about anything. Except possibly getting along with her mother-in-law…
____________________________
Middlewitch Mayhem, the fun sequel to Middlewitch, follows Alicia, a “white witch” and her friends and family through a rompy set of adventures. (Don’t worry, you don’t have to have read Middlewitch for this to be a great read!)
What I really love about this book is the strong sense of community in this novel. Whenever something threatens to overwhelm Alicia, someone is there to lend a helping hand and help her save the day. Middlewitch is one of those places you read about that you wish you could sneak into, because it just seems like such a cozy place to be. Sure there are lake monsters and the occasional spectral goat, but little inconveniences like that are worthwhile when you have the right people to help you out of them.
Alicia herself is a strong, spunky character, too. Part of what makes this book un-miss-able, though, is Domino and Tango. I don’t know if
you’re a fan of talking animals or not, but Domino’s wit and Tango’s sweet temper are impossible to dislike, either way. The whole book has a strong message of acceptance, too, which I really like.
If you’re interested in checking the book out, you can read the first chapter on the Drollerie Press website, here.
Enjoy!

I managed to finish my first book of the year just about 45 minutes before February started. I was determined to have finished at least one book in January, so I spent as much time as I could today reading, and thoroughly enjoyed myself.

My first book for the 52 Books in 52 Weeks challenge (which at this point is already looking very questionable!) was Zerah’s Chosen by my good friend, Isabelle Santiago. It’s an ebook from Drollerie Press. I’m very lucky in that I’ve seen this story from very early stages, and I’ve had the privilege of fangirling about the characters directly with the author, but this was my first chance to sit and read through the book from beginning to end, and it was a definite treat.

Zerah is a rustic world, a world of common men, fishers, and prophets, ruled by Beings both mysterious and fearful. This story isn’t about common men or fishers or prophets, though. Every generation, six people are branded by the Beings and made Guardians over the elements—Water and Fire, Earth and Air, Life and Death. Those born with the brand are sent to the temple to train, to learn how to control the power they have over their elements in order to maintain the balance that makes up life.

The story begins with a woman who has been brought to trial. She has borne a child branded as a Guardian, but instead of sending him to the temple, she has hidden him away, kept him to herself. He is, after all, her child. Kieran has been marked for Death, though, and his power is too much for him to conquer on his own. When he is finally found, his mother hands him over without argument. She knows her time with her son is over. The elders sentence her to life in a solitary cell, fair payment for treason.

Kieran then is thrust into a life he neither wants nor understands. Most of the other Guardians—one is still missing—fear and dislike him. Only Amaya, the Guardian of Water and an empath to boot, accepts him without question from the beginning. Over the years Kieran begins to find his place among his fellow Guardians, and even learns to feel that the temple is his home, but he cannot forget what the “righteous” elders have done to his mother. More than that, he can’t forget to love the way that she taught him to. Guardians are supposed to live without tie, without emotion. Without love. A passionate person to begin with, Kieran simply cannot live under the conditions set for him, and the story comes to a head as Kieran and Amaya’s friendship turns into something much more—something the Code of the Guardians forbids.

Zerah’s Chosen is the first in what is to be a trilogy. The world-building is rich and absolutely superb—you know the minute you set foot into the story that this is a society that existed before you started reading. The characters are also fantastic. The story is mostly told from Amaya and Kieran’s POV’s, but all five Guardians we get to know are so fantastically diverse from each other that every time one of the other three are in the scene it’s a delight.

My personal favorite (as Isabelle well knows) is Phoenix, the Guardian of Fire, who has his own unrequited love for Amaya—something which I know is brought much more in to play in the second novel of the Guardian Circle Series, Zerah’s Offering, which isn’t quite available just yet, but I’ll let you know when it is. I’m lucky to have an advance copy, which I’ll be starting my read-through of… Oh, about now.